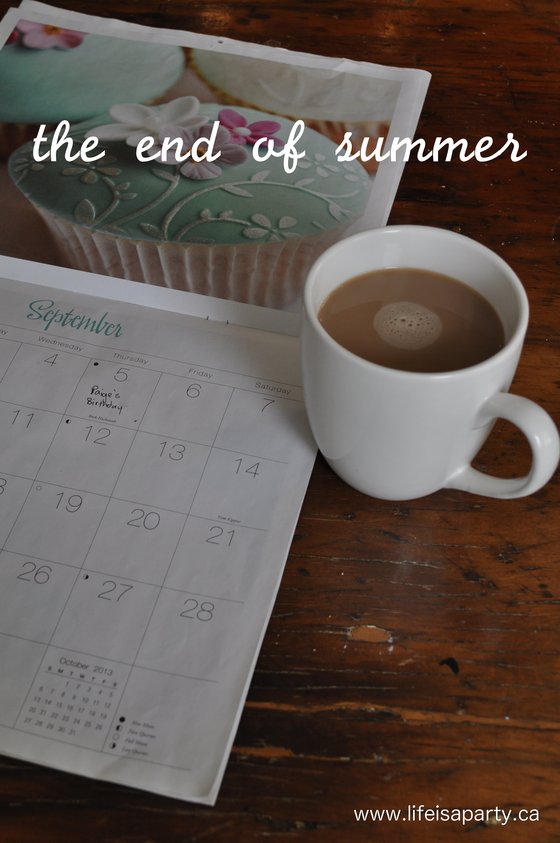 I can’t believe it’s the end of summer and almost time to flip the calendar again, or maybe since one of my daughters told me she was bored today, I can. Time for back to school, and no more lazy days of summer. I have to say it’s been a great summer for me and mine. I was a little worried that I wouldn’t be able to keep up with the blog over the summer -three times a week is a fair bit to get done, along with playing with my two best girls. I’m really pleased that I’ve managed a post every Mon., Wed., and Friday…and since one of my best friends hadn’t realized that I keep to this little schedule I thought I should mention it, in case you hadn’t caught on either. 😉 I have had such a good time camping, crafting, visiting, playing and blogging, I’m not really that keen to head into fall. I do love fall generally -it’s my favourite season of all. There’s my birthday, the fair, apples, pumpkins and leaves, new school supplies, and that beautiful not too hot, not too cold weather that I love. But, since there is still a surplus of teachers in Ontario, I’m not going back to work this year. Last year was spent looking and volunteering and I’m pretty sure I have another year of the same ahead. I’m fighting a little anxiety about that, but trying to trust that God has a great plan for me, and this must be part of it. And although I feel like it’s time to get back into the real workforce, I have enjoyed having time to do lots of blogging and can’t really imagine being too busy to do it. It’s really become a part of my identity, and I kind of love it. It’s not super easy, it’s really time consuming and there are days when it seems like it will never grow enough to make it really worthwhile. But in those moments I can’t help but think about how much I enjoy it, when I do get a few great comments, that rare occasion where the pictures turn out just right, and when I think of all the amazing, creative projects I’ve tackled. I’m even heading to a couple of blogging conferences this fall for the first time. I officially know one person at BlogPodium (Shannon you’ve got to hang out with me, okay) and not one single soul at Blissdom Canada. But, I’m choosing to be excited instead of afraid and going for it.

But before the beginning of fall, the ending of summer…way back on the May long weekend I shared a whole list of projects I wanted to tackle, some took a long time to complete, but they’ve all been crossed off. I thought it might be fun to give you a little update on this last long weekend of summer. 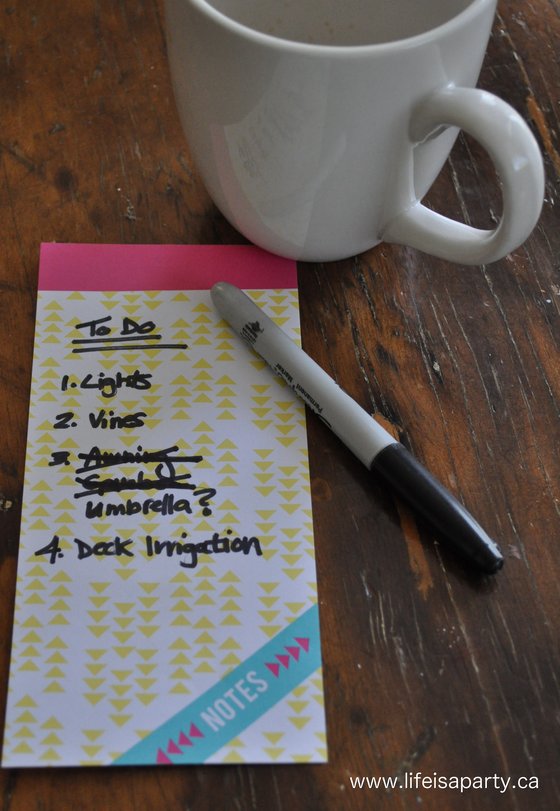 On the top of the list was new lights for outside. I got them, and I really like them. I did hum and hah a little over if they were too small, but in the end I’m really happy with them, and my mom took the old ones for her house (the ones from the front, not the really ugly back one in this picture), cause they were way too traditional for me, and just about right for her. 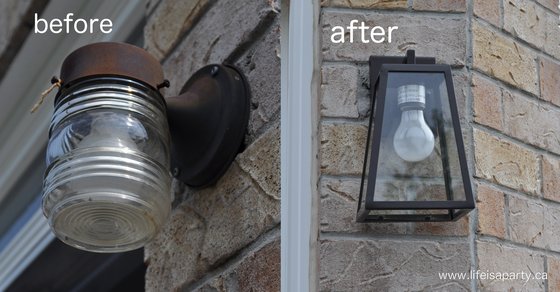 Next on the list were the vines for the pergola. We’ve been trying to get something to grow and give us some shade for a long time now. The grape vine that the bunnies kept eating, finally started growing around mid summer. As the weather got hotter, we saw less and less of the bunnies from the forest in our yard. 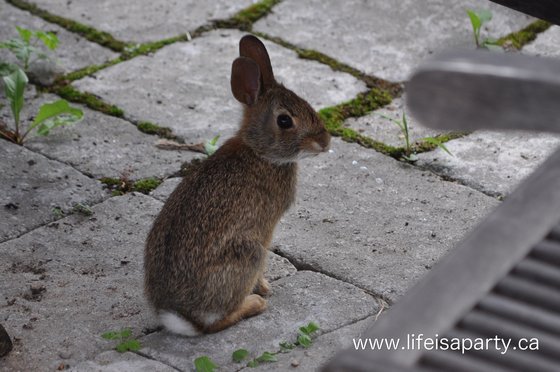 I actually can’t remember the last morning I looked out to see one nibbling in my garden. The vine is growing, and this winter I will be sure to wire it up with chicken wire, in case they visit again. Certainly no shade from it yet, but maybe next year or so? 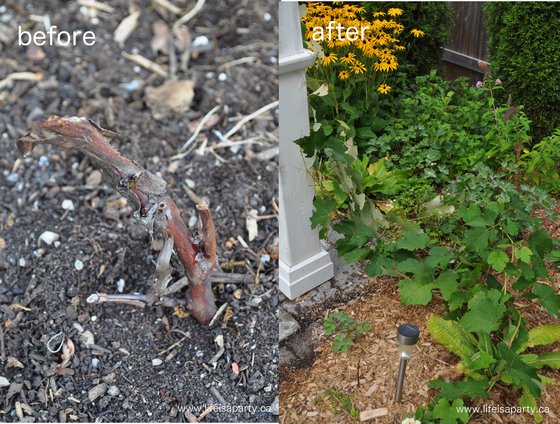 I did purchase a wisteria vine, but it hasn’t grown as much as I had hoped. This is probably in part due to the fact that it couldn’t really climb the post, since there was nothing to twine around. I have finally added some string in the hopes of coaxing it higher. 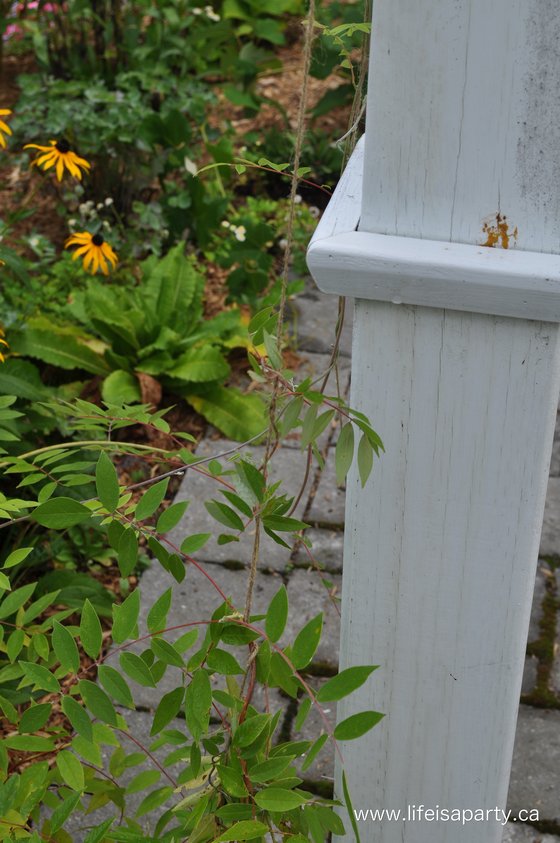 The honeysuckle has just about reached the top, maybe next year it will start creeping across and finally give us some longed for shade. 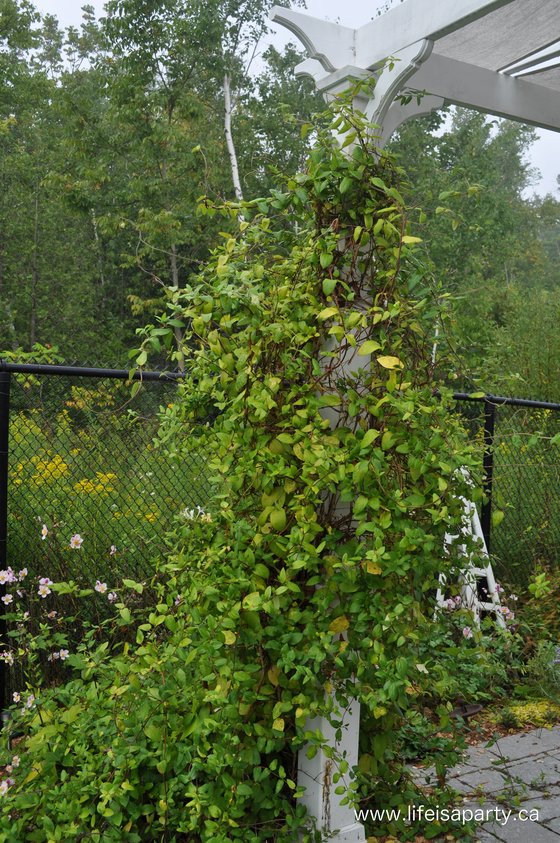 Third on the list was buying a new umbrella to give the deck some shade. We shopped for ages for one. We were all prepared to not get a cheap one this time, hoping it would last longer than the last one. Such an important decision took a little time, a little research. By the time I picked one they were sold out. Seriously. So I saw a cheap one, like 80 bucks cheap, at Ikea and went for it. In truth we haven’t used it too much, but on the bright side it’s still in great condition. 😉 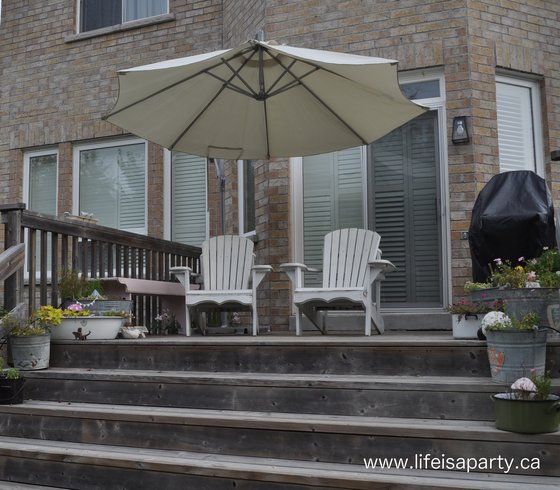 Next on the list was installing my fancy new deck irrigation system. We got it all installed, and it was really quite easy to put in -especially since I basically just watched my sweet husband do it and took pictures while he worked. 😉 You can read all about it here. So I know you’re dying to know…okay maybe not dying, let’s knock it down to curious to know how worked. It worked pretty well. It didn’t go perfectly, but honestly it was user error. Since it’s hooked up to our main hose, there is a Y splitter that sends the water one of two ways, to the regular hose or to the irrigation system. There are little on/off valves at the top of each. 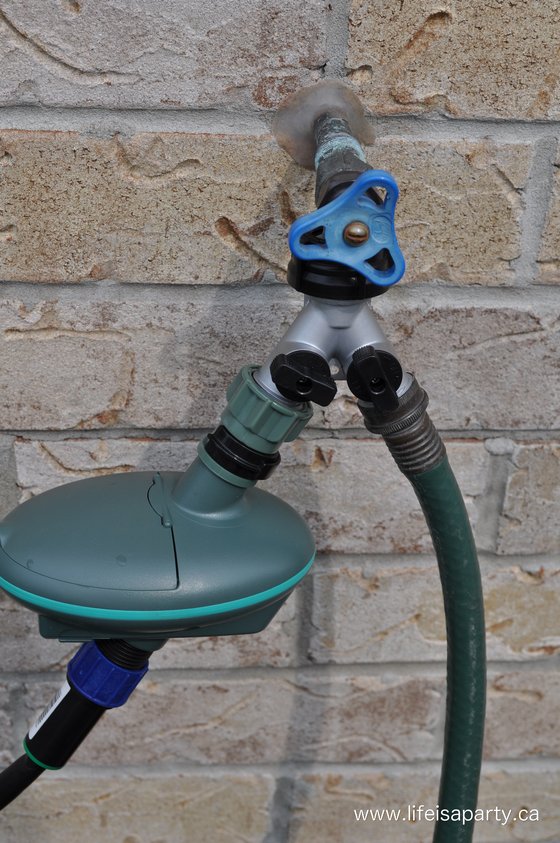 In order for the irrigation system to work the hose needs to be on, and the valve for it open, then the timer just automatically waters it on schedule. If by chance, some fairies, or little girls are playing with the hose and instead of turning on and off the hose valve, they turn off the actual tap, and if by chance the mother doesn’t notice for days or even weeks, your plants might go a bit crispy and it wouldn’t really be the irrigation systems fault. See where I’m going with this. It was all going so well for weeks and weeks and weeks, that I kind of forgot about it, it was certainly off my “I need to check on this” mental list. Until one day I noticed things were getting a little dry and crisp in my pots….and found the tap off. The pots have recovered for the most part now, and I’ve made a mental note to keep checking on things every once in awhile. 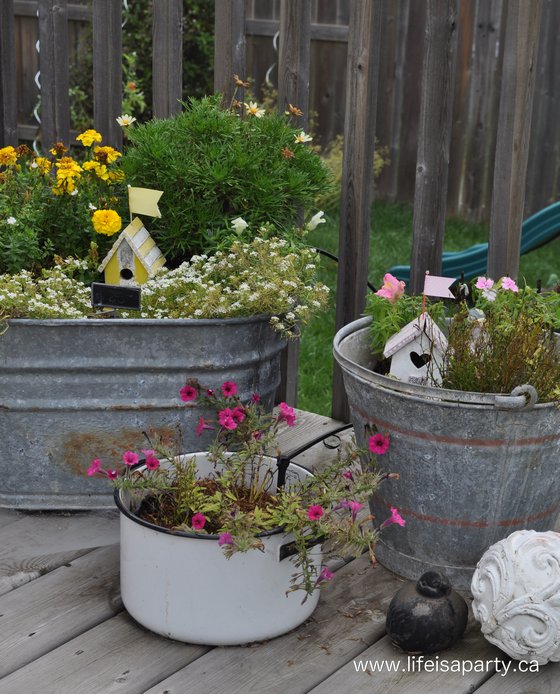 I’ve been busy this week working on some new cement pots for the front, but they aren’t working too well -yet. I’m hoping to have a finished product to share with you next week. We’ve also been working away on Paige’s birthday party, I can’t wait to share all the details with you soon -let’s just say there’s a whole lot a rainbow up in here! And last but not least I’ve been cleaning. Fall cleaning, trying to get organized and ready for fall routines. I had the pleasure of helping a dear friend move over the summer, and while wiping out her kitchen cupboards, I had that thought, when have I done my own…not since I moved into the house. It was time. But you know how deep cleaning is, one clean thing makes everything else look dirty, so there may or may not have been a toothbrush involved. It’s almost all done now, and I’m already feeling virtuous about it, and ready for the last weekend of summer! With one more long weekend to enjoy, life really is a party.