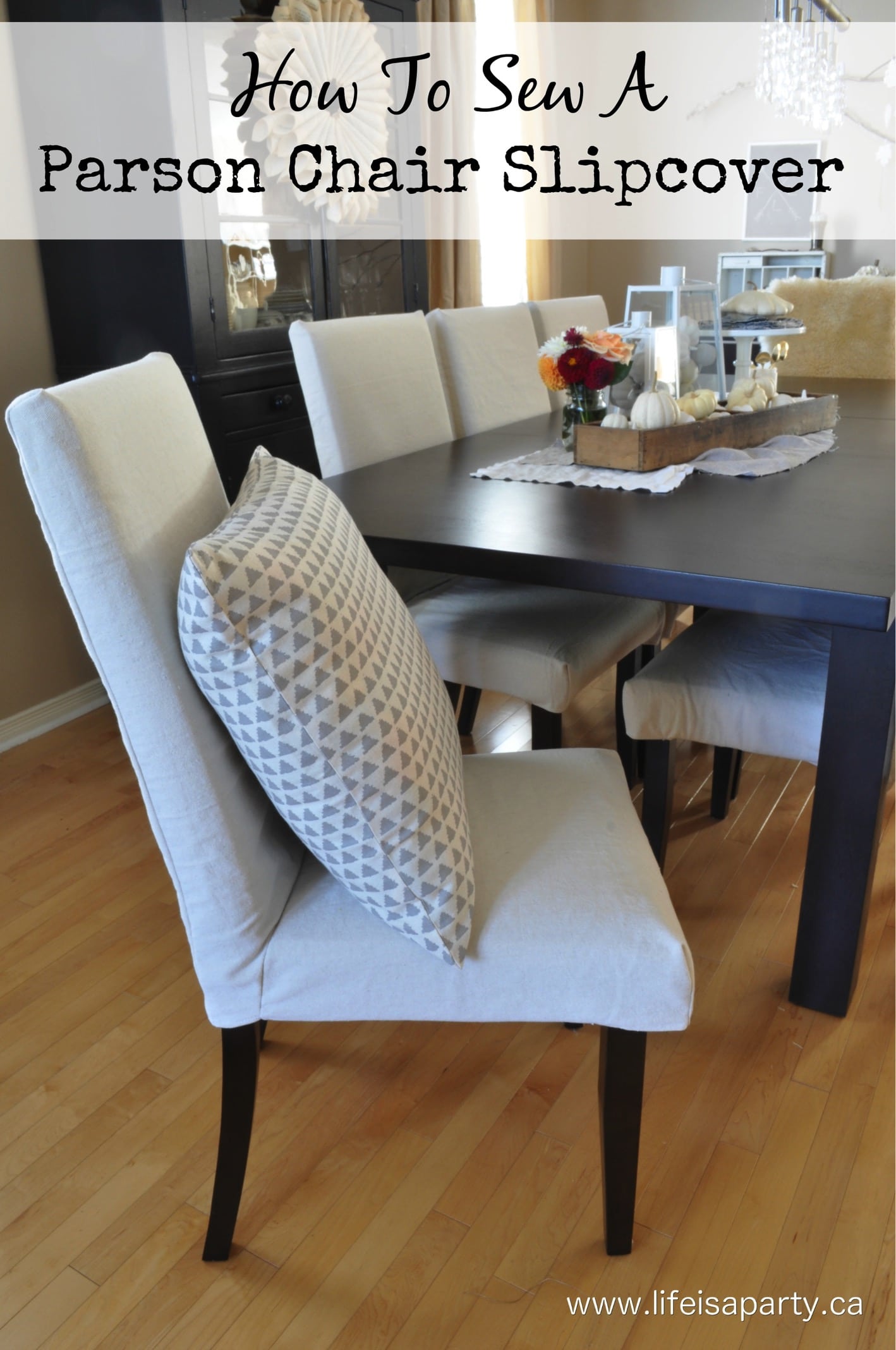 It’s week two of the One Room Challenge already, and I’m excited to share what I’ve been working on as part of my Rustic Scandinavian Dining Room Makeover.  If you missed week one, click here to see the before, and my design inspiration.  I started things off with making ten slipcovers for the Parson Chairs in my dining room.  I have loved these black leather Parson Chairs over the last ten years of having them.  They’re comfortable, they’re still in good shape, and they have been easy care since the leather could just be wiped off if needed.  I wanted to keep the good parts, but give them a makeover to fit our new lighter colour palette.  I decided slipcovers would do the trick for me, they’d still be comfortable, cute, and with removable slipcovers, they’d still be easy care too.  Here’s the before shot of the room. 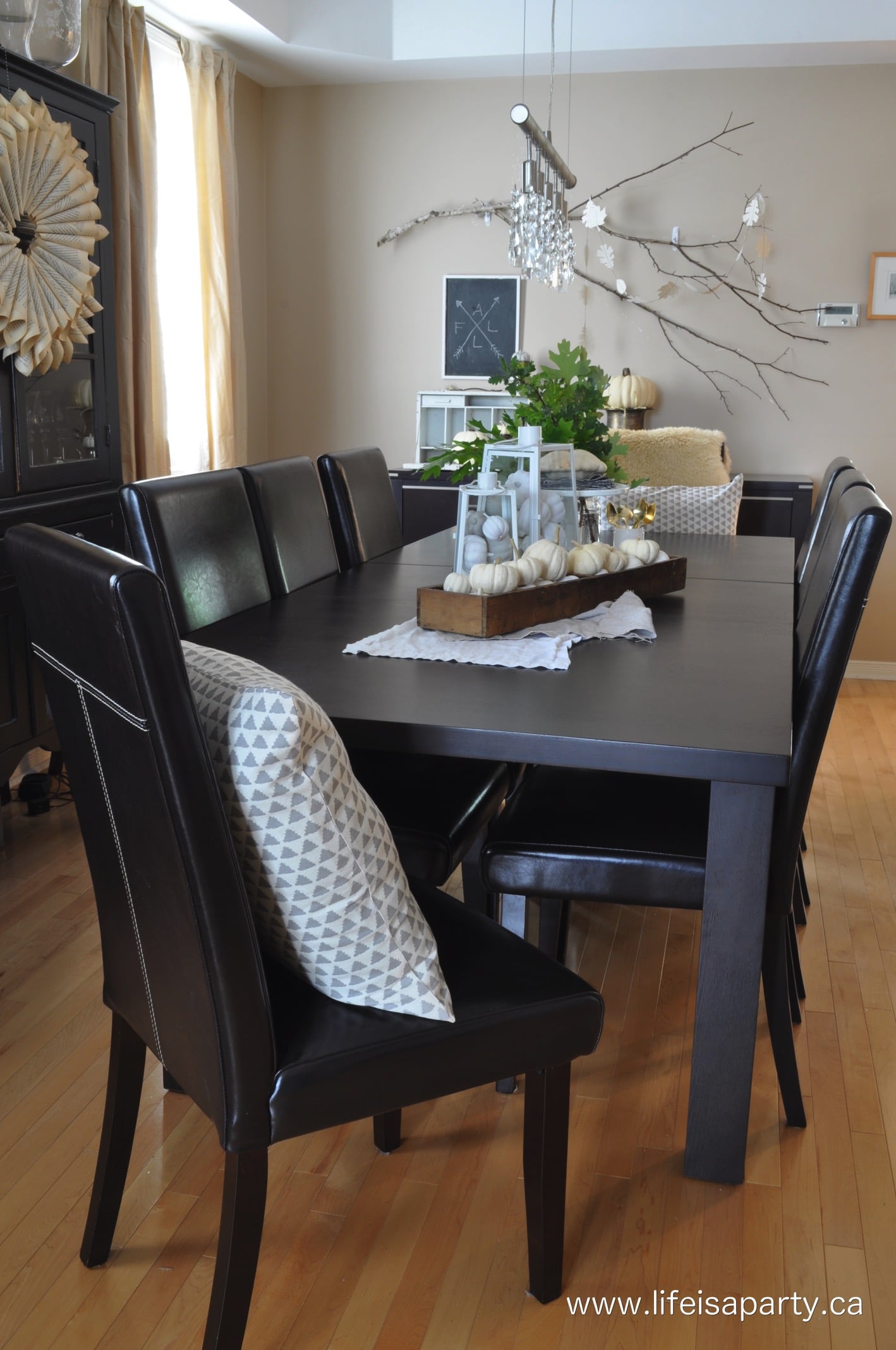 I debated buying slipcovers.  But these chairs were bought at a big box store and aren’t available any more.  I couldn’t find the exact size slipcover I was looking for, since these are a smidge smaller than most.  I debated buying some ready mades and adjusting them, but figured if I had to sew anyway I may as well make them myself.

I originally planed to make long covers, but while I was looking for some to buy, I saw the short ones and thought they looked a little more contemporary.

I had some fabric, so this was a really low budget project for me.  The only thing I had to buy was some more thread and some velcro, both of which I found at the dollar store. 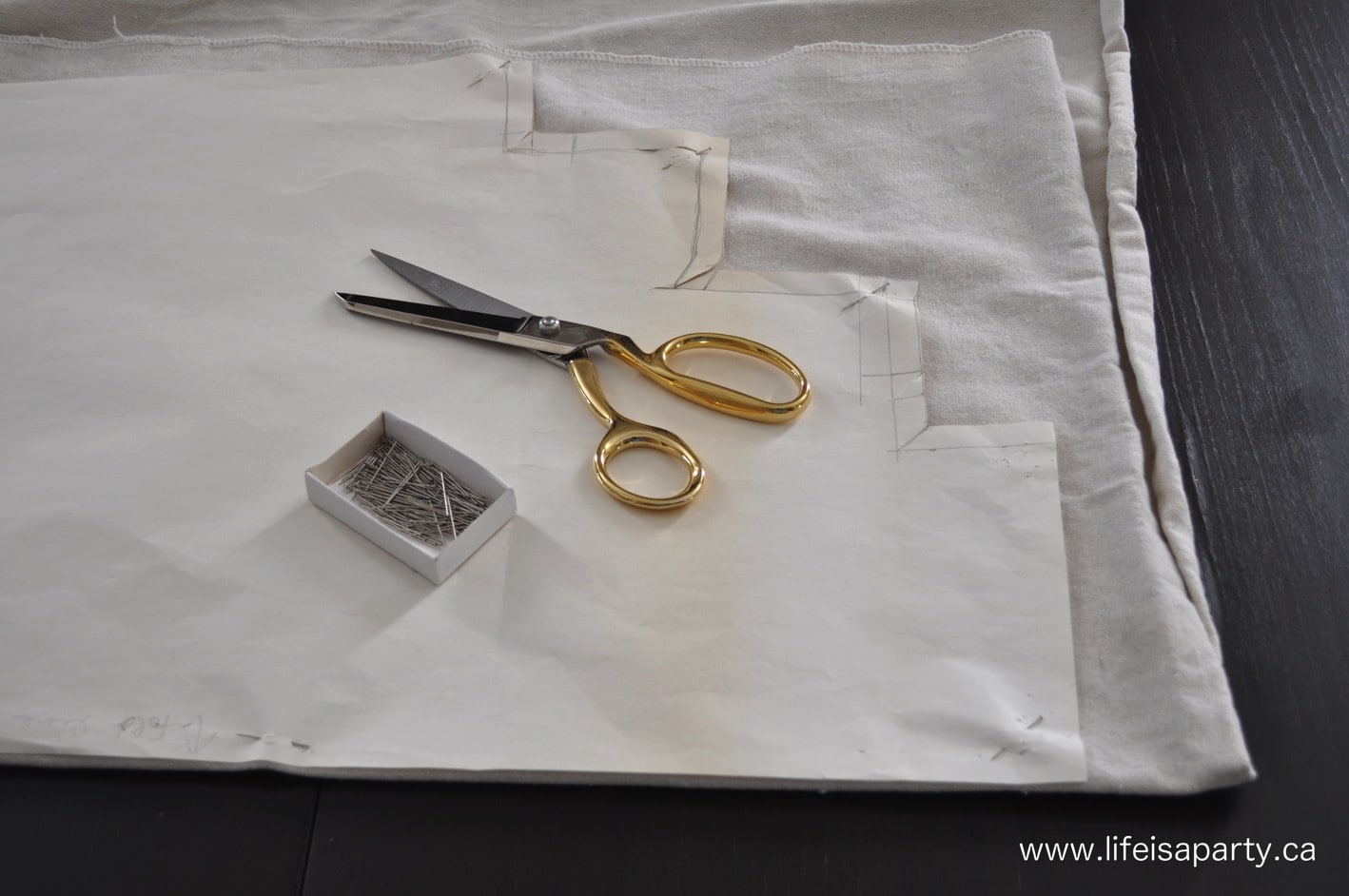 The fabric I used was actually large fabric drop clothes from the hardware store.  These were used as table cloths for an event, and instead of them getting thrown out at the end, I snagged them and brought them home.  After a good wash they were ready to go.

The hardest part of the project was getting started on the pattern.  I saw lots of examples on-line where people just cut and pin to make slip covers, but needing to make ten of them, I knew I would fare better with a pattern that I could re-use each time. 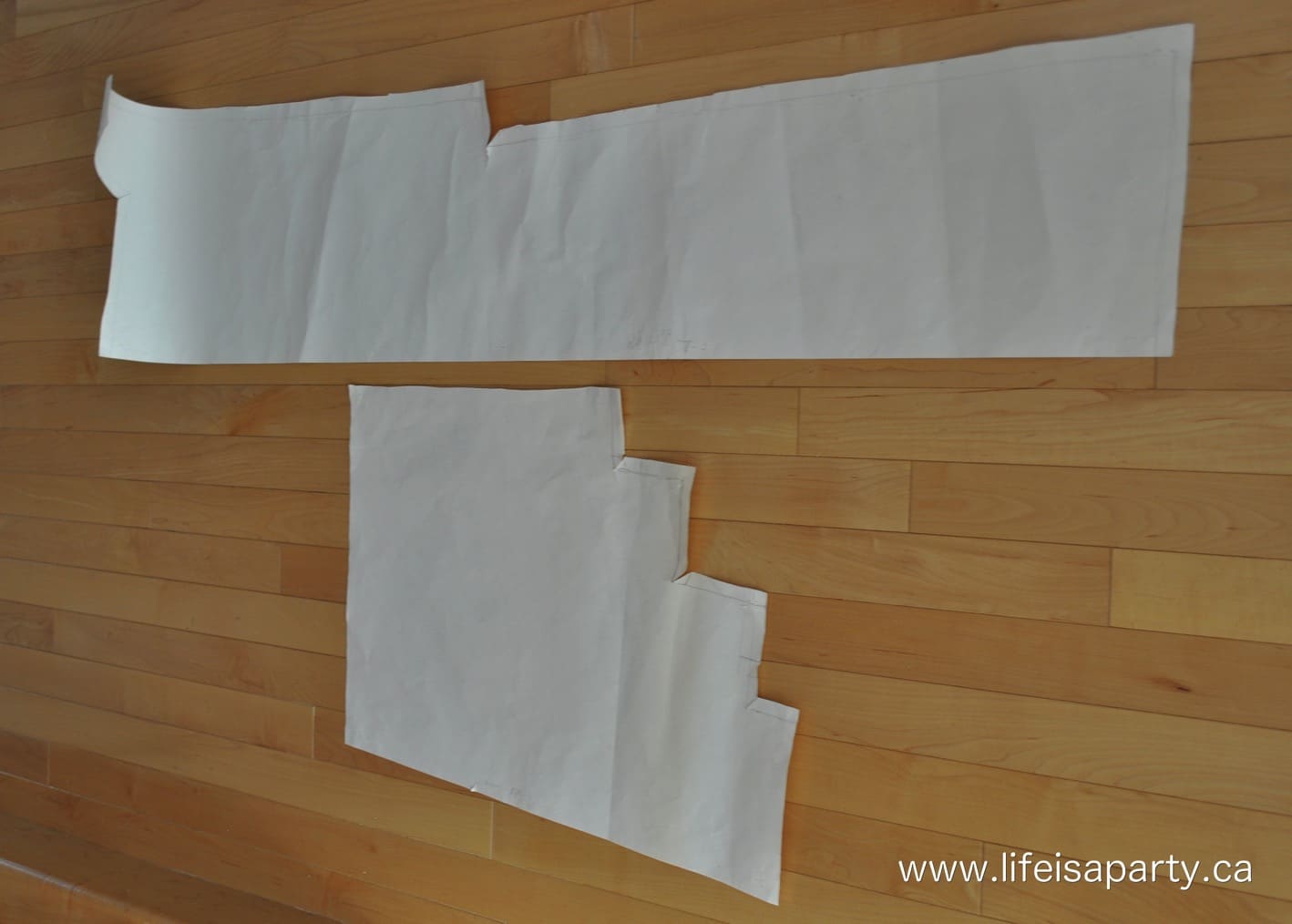 To make my pattern I spent some time researching and thinking about how to do the least amount of sewing.  I came up with one back piece and one seat piece.  The only draw back to this pattern is that it requires large pieces of fabric, but that’s where the drop cloths work out great.  I started out by taping newspaper to the chair as a cover.  I then carefully cut it off the chair along the spots where I wanted the seams.  Then, I laid out the newspaper, folded it exactly in half and straightened out my edges.  I placed the newspaper pattern onto thick white paper and traced it.  Then I added a half inch seam allowance, and cut out the pattern in the white paper.  The white paper allowed me to add the seam allowance after, but also to keep the light fabric from getting dirty from the newsprint.  The straight edge of each pattern is the fold line, so the fabric is folded in half and the pattern placed on top.  When it’s all cut out, you unfold the fabric and have the complete piece, with both sides matching each other.

Once I had my pattern, I cut out my first cover.  I used pins to pin the fabric into place, and adjusted as I went.  For my first attempt I used a disappearing marker along the pin lines so I knew where to sew.  After each seam, I tried the slipcover back onto the chair and adjusted if needed.  The first slipcover took the longest, but I knew that after I’d figured out the pattern and my method it would get quicker and it did. 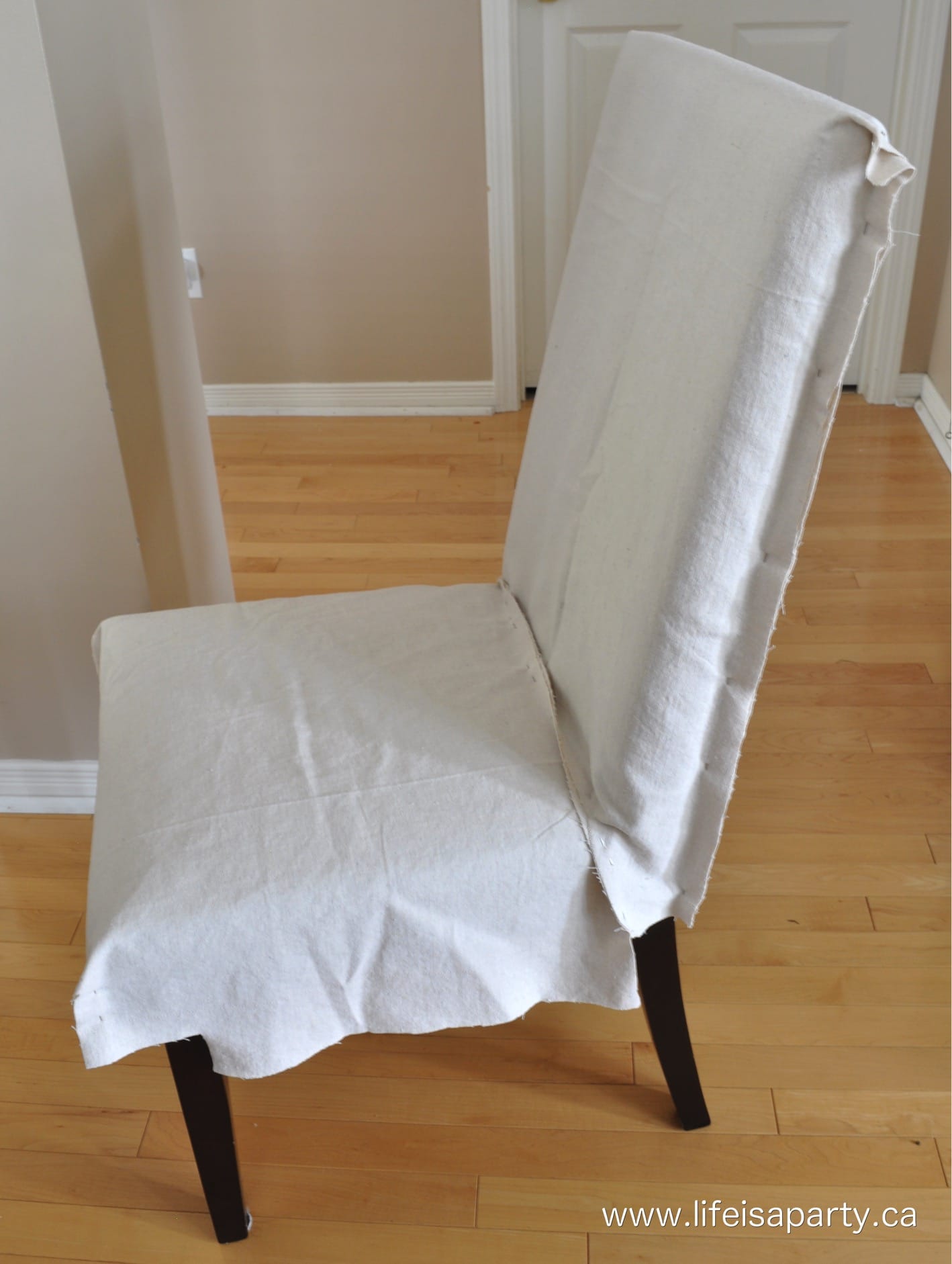 For the second chair, I made a few adjustments to the pattern, and then cut it out and pinned it to another chair.  This time I used the pin lines as the sewing line. 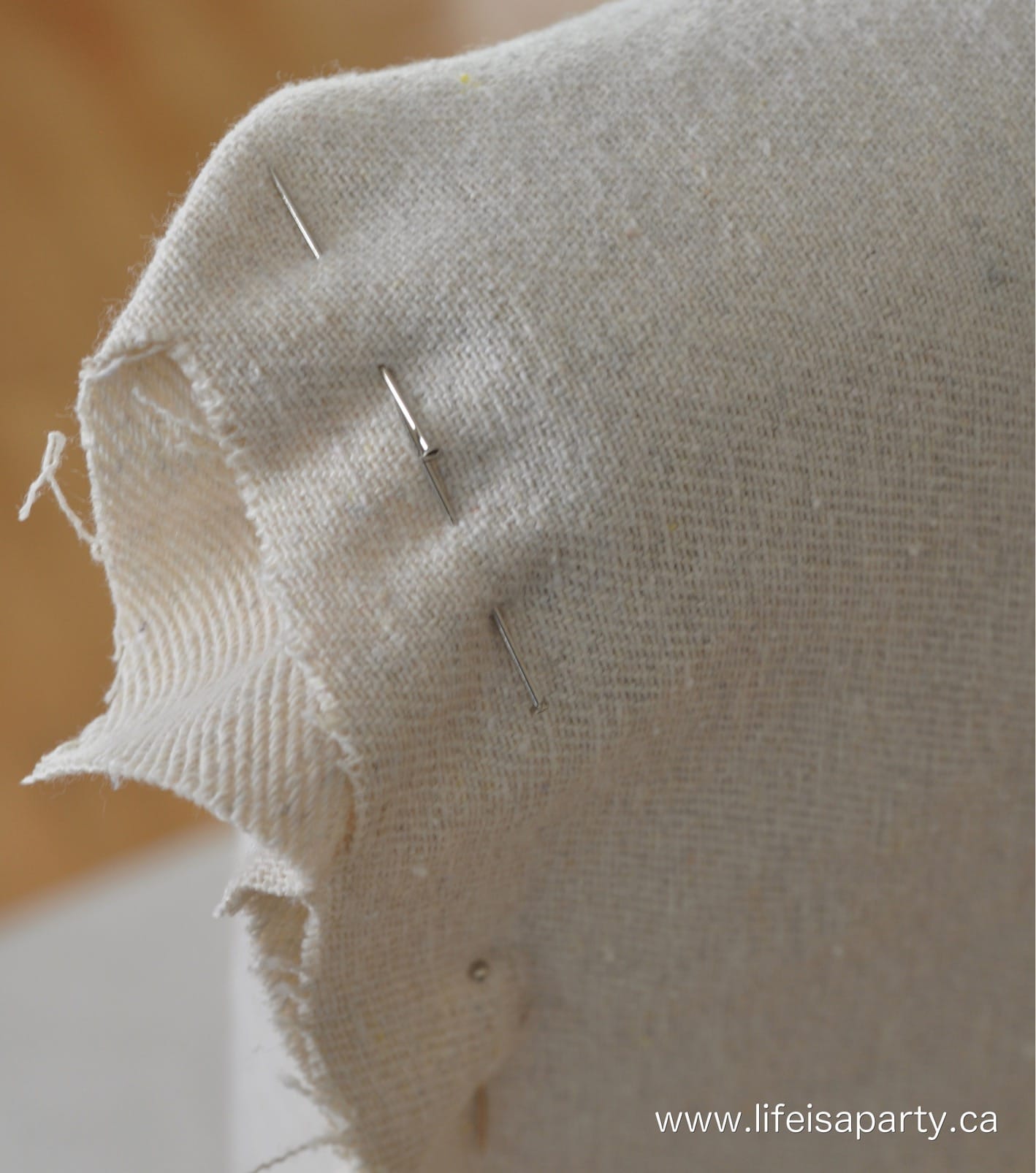 After the second one was done, I was confident with my pattern, and was able to cut out more at a time, once I developed my method the pinning and sewing got quicker too. 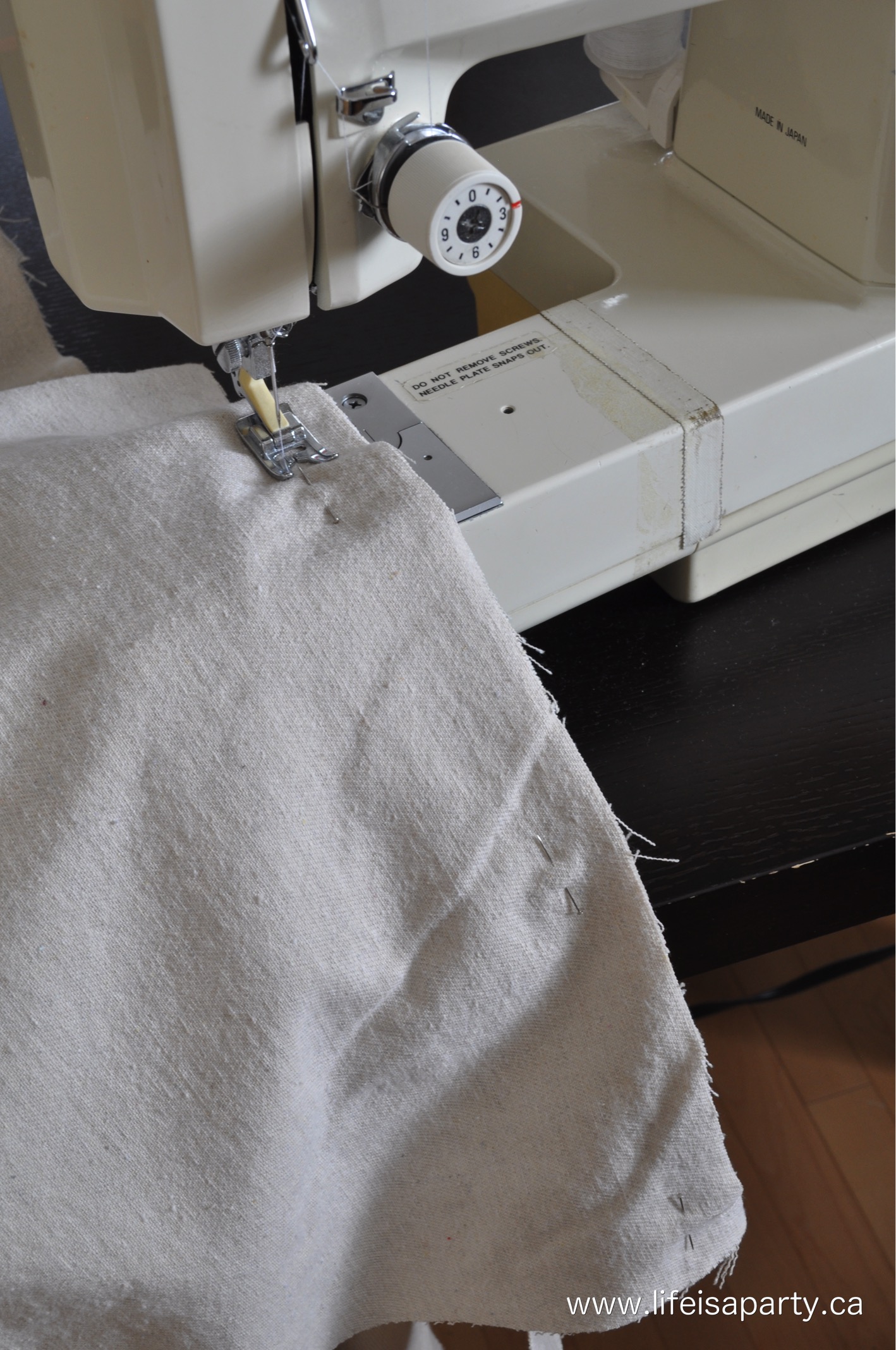 To finish the covers, I removed the bottom of the original chairs, which were velcroed in place, and added velcro to the new covers so they could be wrapped around the sides of the chairs.  This will make it easy to remove and wash them in the future. 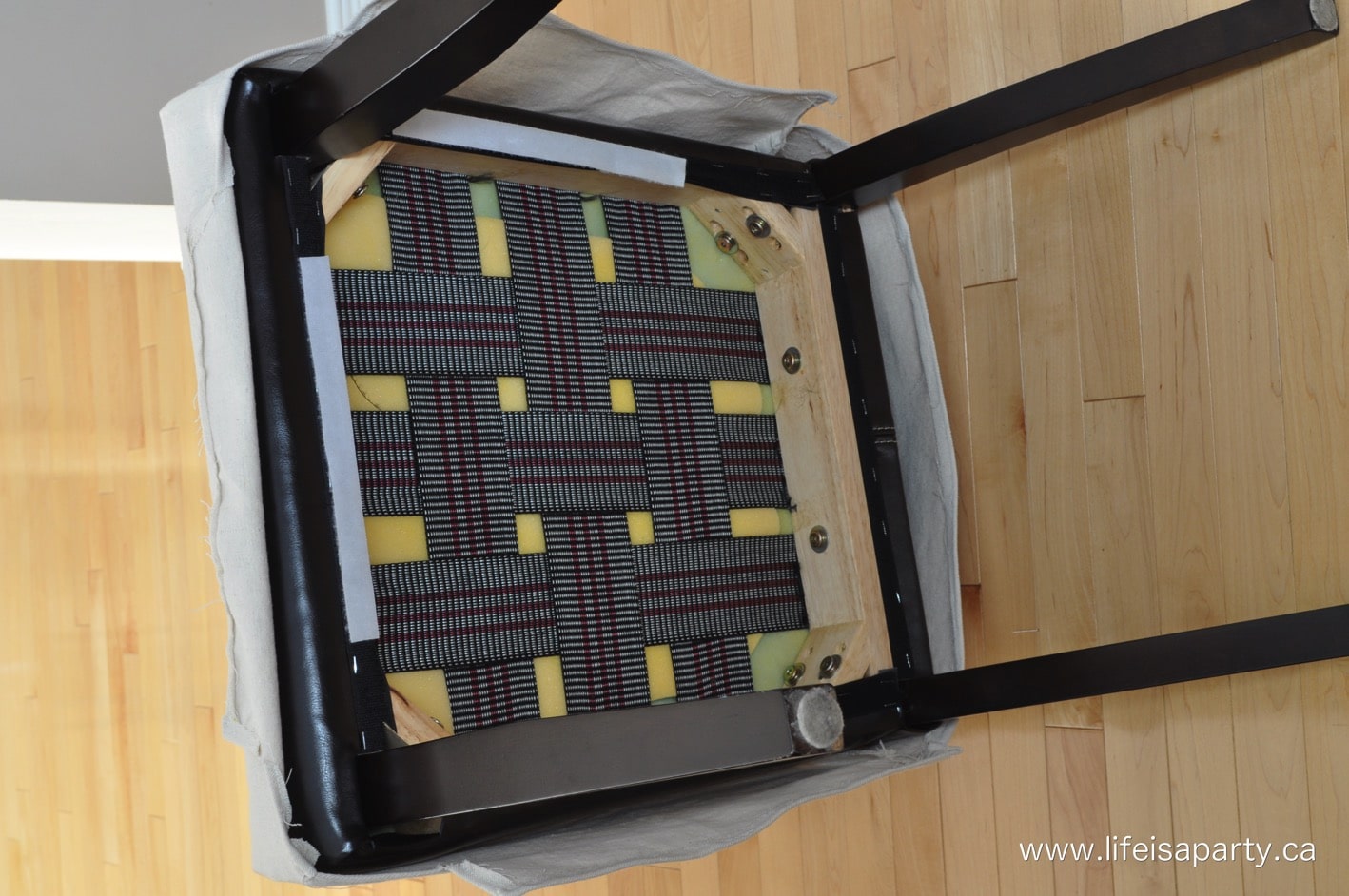 The covers aren’t quite perfect.  There’s definitely a few differences between them, there are some  not perfectly straight seams and some of the slipcovers don’t lay perfectly everywhere.  But, they were so worth doing.  The whole room is already looking lighter.  I can see that the chairs will be a perfect neutral backdrop for things I’m photographing in the room in the future. 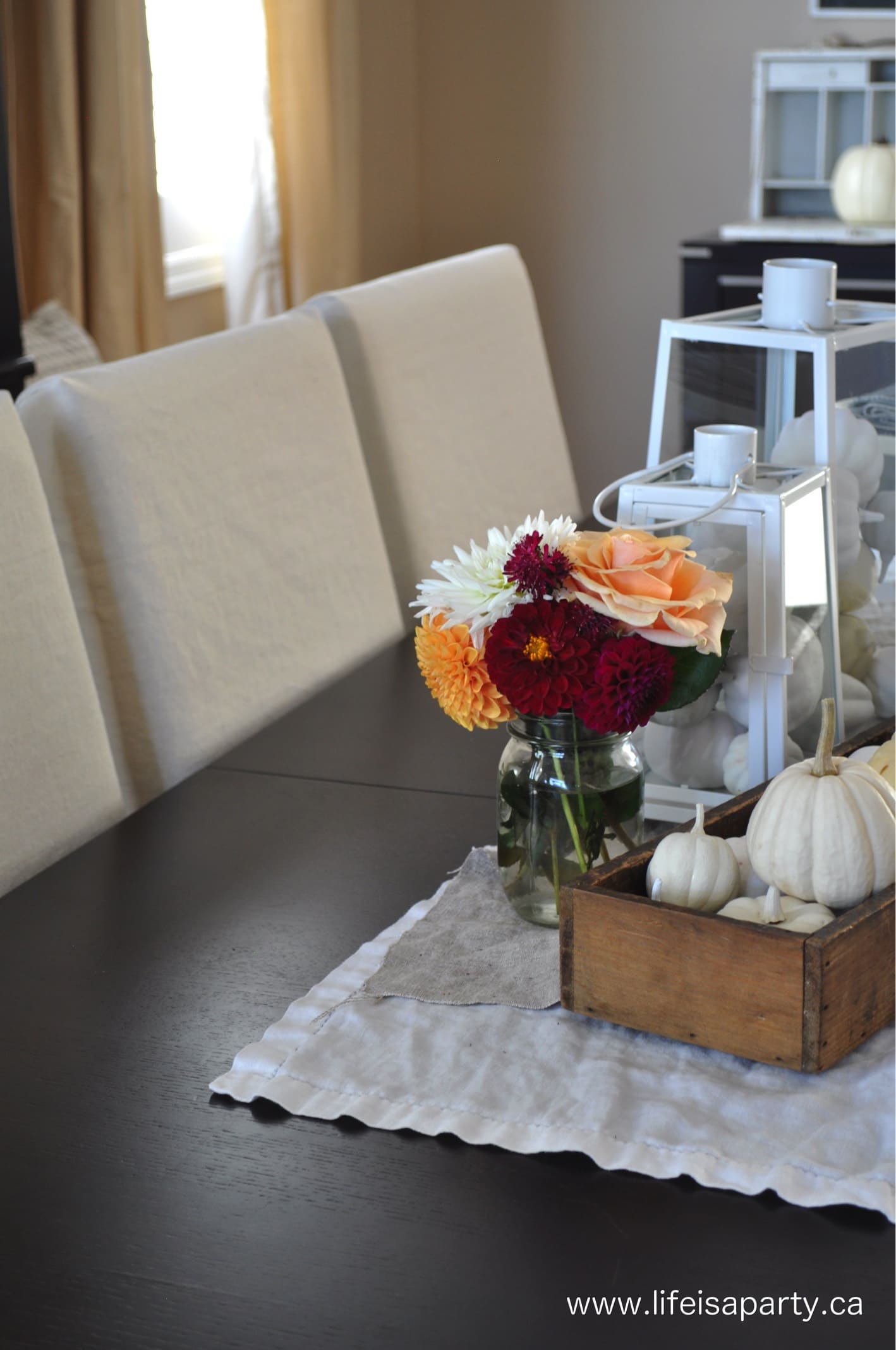 I am thinking I might re-finish the wood legs to something a bit lighter, but then again a little bit of black in the room might be a good thing.  I think I’ll leave them for now, and see how they look as the room evolves over the next 5 weeks. 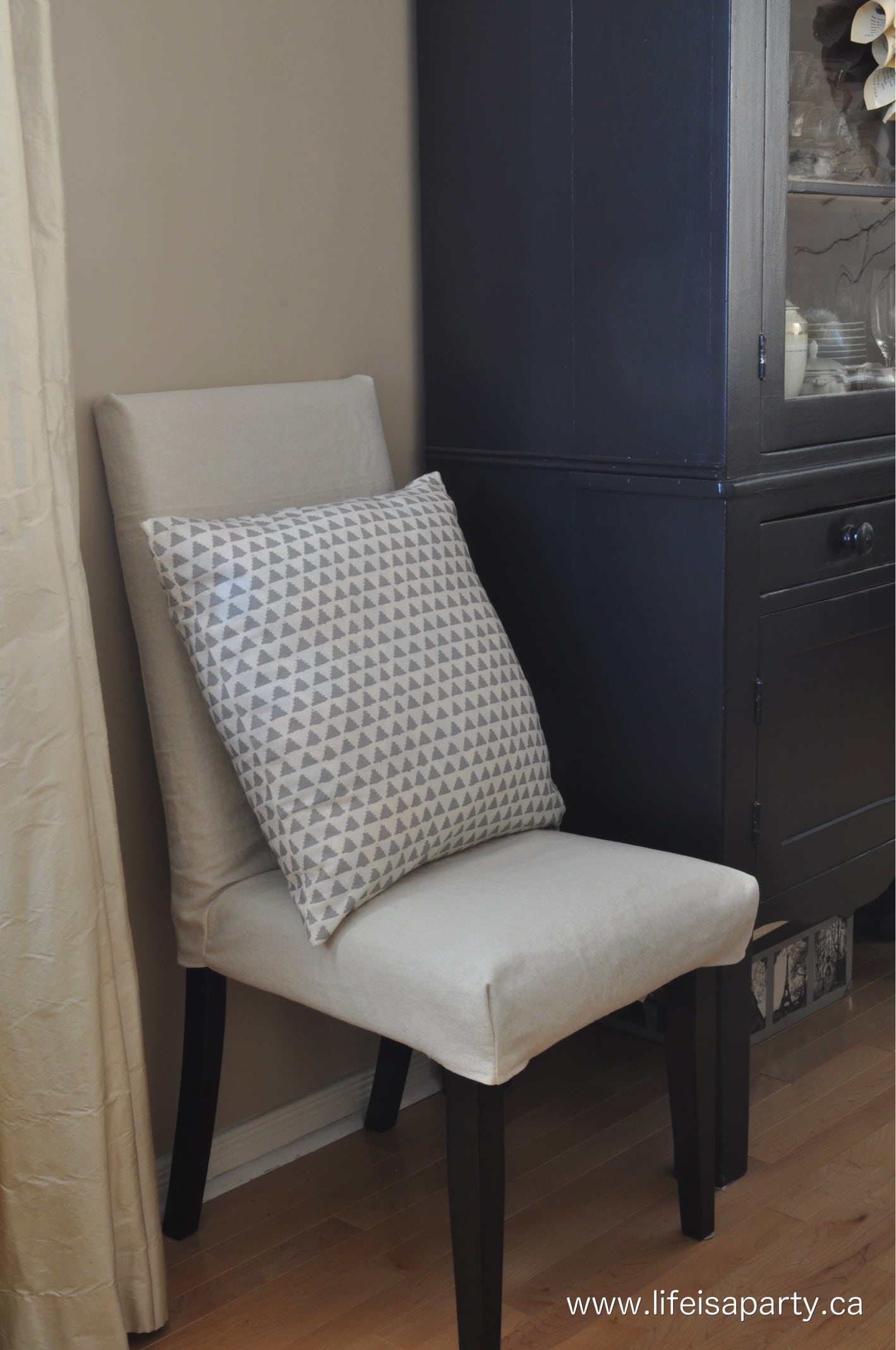 I’m so pleased that this project only cost me about $10 for thread and velcro, but even if you had to buy the fabric, this would be a really inexpensive way to give your old parson chairs some new life. 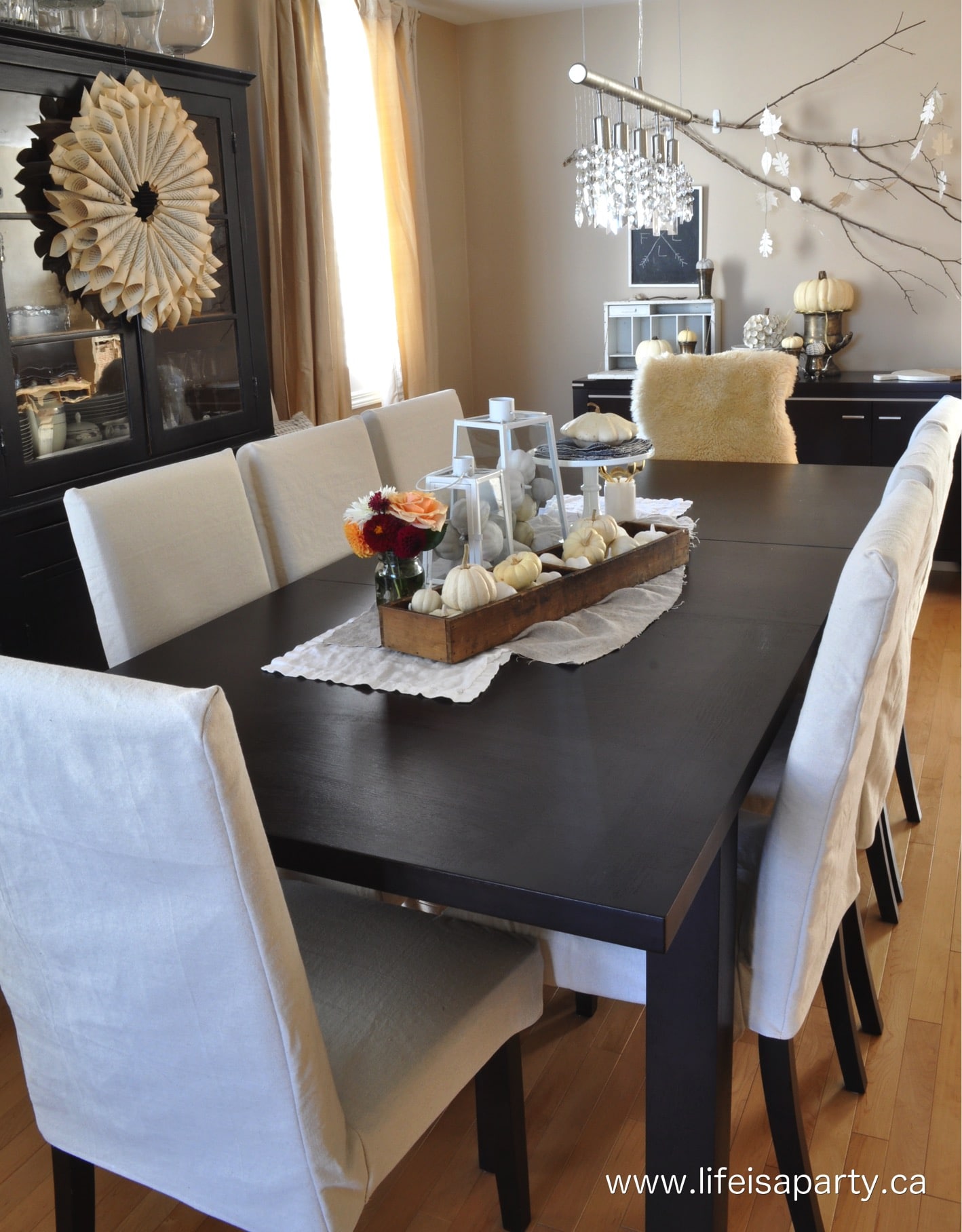 With handmade Parson Chair Slipcovers, life really is a party!

You can catch up on my other projects for the One Room Challenge here: