On the weekend we celebrated my daughter’s sixth birthday with an ice cream themed party.  I created an ice cream stand imaginative play centre as one of the activities at the party.

We started out with a menu board, created from her chalk easel and a home made sign, complete with some of her ice cream drawings. How We Made the Pretend Ice Cream

For the chocolate chip and smartie flavours we used markers to add dots to the cotton balls. We made the chocolate and cherry flavours by dyeing the cotton balls with fabric dye.  I added about half a package of pink dye to boiled water in a mixing bowl, and added wet cotton balls, that had been rinsed in hot water.  The dye only took a few min. to set.  Then I rinsed the coloured cotton balls with cold water, until it ran clear. I repeated the process with brown dye to make the pretend chocolate ice cream.

After they were rinsed I tried drying the brown ones in the clothes dryer in a garment bag, but they became a little misshapen, and did not fluff up again like I had hoped.  I decided to let them, and the others finish drying on newspaper over night.  When they were dry, I fluffed them up a bit more with my fingers. After they were all dry, we put them into empty ice cream containers.

This worked out really well, and the kids absolutely loved it, and loved playing with it. We also used red pom-poms for cherries, and some of the plastic fruit and cookies we had for ice cream sundae toppings.  There were plastic bowls, scoops, cups and straws for shakes, and real ice cream cones.  I also used some plastic bottles we had from play food sets, and added some home made labels for chocolate, caramel, hot fudge, strawberry, and pineapple sauce. There also had a checkout table, with our play cash register, and a set of play money.  After the kids got their ice cream order, they headed over to the cashier to pay for it. The ice cream stand was a real hit, and something my kids will play with long after the party.  The ice cream play centre was set up in the basement, since it looked like rain, but later in the party it cleared up and we were able to head outside for some games.

The first game was an ice cream relay race.  We divided the kids into two teams, and gave them each a wooden ice cream cone, and two magnetized scoops of ice cream, from the “Melissa and Doug Ice Cream Parlour Set”  The magnets hold quite well, but were just wobbly enough to make it fun. Our second game was our version of ice cream cone bowling.  We used ice cream cone popper toys, to bowl over some small ice cream cones.  I found it to be harder than it looked!  And it was a lot of fun for kids and adults alike. Our final activity was some ice cream themed crafts.  We set them up in the dinning room.  There were wooden ice cream sundae cut-outs to be coloured, glittered and bejeweled.  There was also foam sheets cut out in the shape of a popsicle.  The children could glue a popsicle stick on the back and add a face with googly eyes and markers. It was a great party, and the kids seemed to really enjoy the games and activities.

Be sure to also check out: 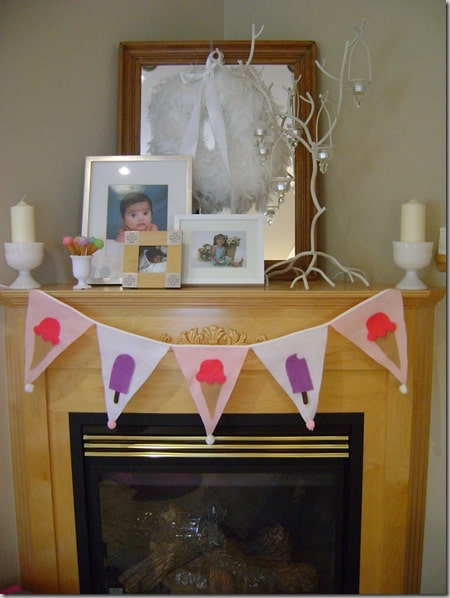 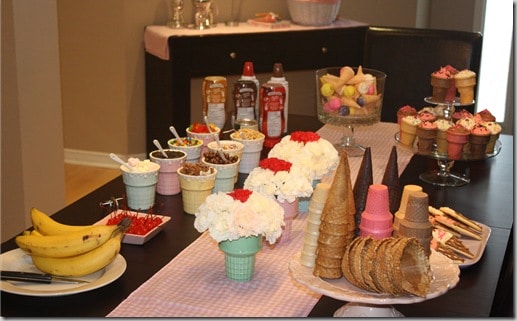 Tweet
PinIt
« The Ice Cream Birthday Party!
I Scream, You Scream, We All Scream For Ice Cream! »